Coding by Hazel!!!!!! (Former font by Frostpaw/shine!) (Some additional coding by me!) Infobox pic added by Hazie!

It's your resident mop :P

Swift is a light gray she-cat with light green eyes, faint tabby stripes, and a pale belly, chest, paws, ear tufts, and tail-tip! The stripes on her face are optional.

Her former purrsona was Ivypaw/shadow, a sleek dark gray she-cat with big leaf-green eyes, a paler chest and belly, and a big plumy tail!

Swiftfeather is a light gray she-cat. Her fur is fluffy, and her chest fur is especially so. She has a big fluffy tail, lots of head floof, cheek floof, and elbow fluff. She has a pale gray tail-tip, paws, belly, chest, ear tufts, and ear fur. The inside of her ear is pale pink, and so is her nose and her tongue. She has long white fangs that are great for gobbling cookies.

Swift has ish-faint tabby markings, that can be either mackerel tabby-like, or round stripes and dashes (see Darkwing's drawing below for reference). The stripes on her face are optional, and so are her darker gray ear tips. She has a long muzzle and a long tail and long limbs. She has a small build, and she is kind of weak. Her eyes are light green, but they can be gold in the right light.

Swift THOUGHT she joined the blog in September 7, 2020 but then she found out that she ACTUALLY joined on August 5th, 2020 :P She enjoys reading articles and is trying to write some of her own! She's also trying to find secret pages.

She's currently running for senior warrior (apprentice?) with Frosti and Snowo and would appreciate any vouches!! <333

She has written four articles: Who Shaped Who, Disabilities in Warrior Cats, Do the traits on the Warriors Website actually match the cats?, Why I Hate Silverstream, and Why I’m Glad Bristlefrost Died.

She's mostly found on the Tavern, the Games Page, and the Art Page! She hosts her own NTA and does daily inspirational quotes (found on the Tavern and the wiki). She also does daily doses of quotes (but they're more weekly). She's made 1461 comments as of June 3rd, 2022.

Swift's name on the Blog is "Swiftpaw/feather 🪶 | she/her | Running for SW with Frosti and Snowo! <33 | I am a mop! (a Swiffer Wet Jet!) | click my name! | formerly Ivypaw/shadow" and this wiki page is linked under it.

Her mentor is Marblerose!! She is very happy that she got a mentor! Her IRL friends are Wildpaw/frost and Maplepaw/breeze.

Swiffer's username on the BlogClan Wiki is Ivymoon9. She is pretty active on the wiki, and likes following trends and making polls. Anyone can talk to her on her Message Wall:Ivymoon9 if they need anything :D

Swifto is in the BlogClan Discord server! Her tag is Swiftfeather5#4813, and you can send her an invite anytime, just tell her beforehand! Her nickname on the server is fifth sweater (swift).

She is also on many roleplay servers started by BlogClanners, and loves to roleplay! She's currently in the progress of making her own.

In real life, I'm kind of loud and annoying, but only around people I know. Around people I don't know, I can be as silent as a rock, but once I get to know them, I enjoy talking to them. I'd say I'm pretty caring and kind. I'm not the most upbeat or positive person, and I literally only see the bad in everything. I'm also pretty proud, and I'm not very sophisticated or dignified. I'd say I'm pretty smart, but that sounds braggy. (I also don't think I'm braggy but who knows).

I also worry a lot and I am pessimistic. I also like to procrastinate a LOT. I'm introverted, but I have extrovert qualities, so maybe an extroverted introvert? I'm not sure. I'm also gifted. My personality type is ISTP-T according to 16personalities. My spirit animal is a deer.

did (all of the other villains' reasons were just ambition)

Platonic Mate: Snowo :D (Formerly Icee but we broke up)

(skip if you don't want to read it)

So Keeko, aka Hawkeye, my mother, has a lot of siblings and they are Captain, Cheery, Constella, and Snowo. So.......Snowo is my aunt but also my platonic mate? (Idk).

Now Snowo's parents are Lightningshadow and Nilla I think? Snakewing is listed there too so idk but I think it's safe to say that they're my parents-in-law. Snowo's siblings are also Nep, Captain, Icee, Foxi, Cheery, Coldie, Keeko, Nightpaw, and Violetpaw. So they're also my siblings-in-law. But Cheery, Captain, and Icee are Keeko's siblings too?

Seal (sibling) also has other siblings (Moonseeker, Pancakekit, Canarynight, Fluffy, Snowwy, Almond, Foxi, Icee, and Stella) so they are my siblings too. Well Snowwy is my platonic mate and Foxi is my mother....and Icee is my aunt/sister in law. Seal also has some cousins, Moontabby, Egg, Tiny, Rabbi, and Captain. Tiny's supposed to be my sibling but whatever. And Cap is supposed to be my aunt but who cares.

Frosti, my sibling, has parents: Tigerlily and Minnowheart. Let's assume Frosti is my adopted sibling.

(Didn't know I was related to so many amazing people!)

(this isn't updated by the way)

I guess I'm taking art requests! My art isn't the best, keep that in mind, lol

Just ask me on my Message Wall or ping me in a discussion post! I'll probably get back to you soon, and if I don't, try again:)

Physical Description (try to be as detailed as possible):

Floof, no floof, or some floof?:

(It's all free, obviously!)

Frosti, the coolest B)

Cloudy Who THINKS She Remembers Swifty!

Captain, your aunt, cousin, and who knows what else :P

What People Say About Me

Even if i don't know Ivy well, i can tell they are a great member of the blog :D - Rainie Tysm Hazie!! You're great too <3 -Swift

I done know I've that well,but based off what I've read in some of her comments(sounds creepy lol)I can tell that she's a really cool person!-Snowpaw/storm Ahhh thank you! (And it doesn't sound that creepy, lol) -Swiffs

Swifty is really kind and welcoming and fun. She is a great addition to the Blog! I love her articles -Mothy :D Tysm Mothy!! You're super kind and fun and amazing too, and the blog wouldn't be the same without you!

Awesome, Grade-A person -Canarynight Ahhh thanks!!! You're great too!!

Ivyshadow is so sweet and kind and clever and generous and beautiful and honest and modest and a bunch of other awesome sauce. She's a really cool cat human bean being!! ~Mounty Thanks Mounty!! You're sweet, kind, clever, generous, beautiful, honest, modest, awesome, and cool too!! <33

Ivyshadow is the best! Her art that she made of me is awesome, and she's such a kind person! - Frosti Thanks Frosti!! You're the best too!!

I remember Swifty from her comments! She is super kind and caring, and very thoughtful too! She makes the Blog a happier place just by simply existing and commenting! Swifty is also very bright too! (Both bright and bright, if you know what I mean😜) I really hope to know her better, and I bet she will be more awesome once I get to know her! - Cloudy sends her best wishes!🌹 Awww thank you, Cloudy! You're amazing and always super cheerful! I hope we can be very good friends <3

SWIFTO IS AMAZINGGGGGG! Don't listen to her when she says that she's annoying IRL cause she's not! She's super great at drawing and a great person overall :D - Wildy Ahhhhhh tysm Wildy!!! But you're even more amazinger than me! And you're a brilliant artist and super smart and very good at debating :D (Also I'm KIND OF annoying to some people IRL (like Annoyingpaw) because they are annoying back :P)

Swifto is awesome! She's the best apprentice ever, and I'm glad I have an apprentice like her!! - Marb Tysm!!!! You're awesome too, and I'm very happy to have you as my mentor, you're the best!! <333

By the dazzling Darkie!

By the miraculous Mounty! 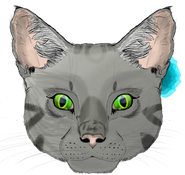 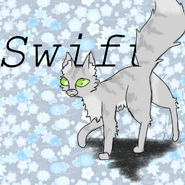 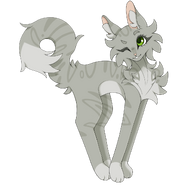 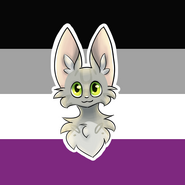 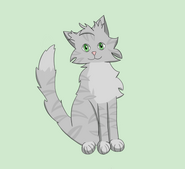 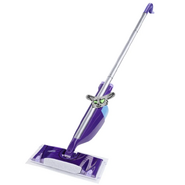 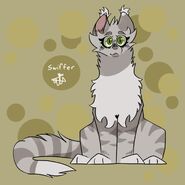 An amazing gif by Dawny!!! 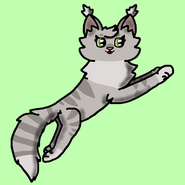 By my wonderful mentor Marb!! 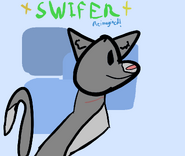 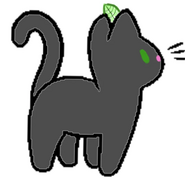 By the amazing Wildy!

EXCUSE ME? NOTHING? YOU FORGOT TO ADD THAT YOU ARE AMAZING, KIND, FUNNY, CHAOTIC IN A GOOD WAY, ILYYYYYSMMMMM AHHHH THANKS YOU'RE AMAZING TOO!! Maybe I'll make this a vandalism part hehe
HIIIIIIIII! YOU'RE A GREAT FRIEND AND WHYYYYYYYY DIDN'T I SEE THIS SOONER???? (btw ty for the coding)

(most of these are from school by the way)

"Slideshowpaw threw her baby in the garbage can" - Me

"I have a million friends. I'm best friends with the queen of the world. And I have 10 cyborg hands, oh, and the universe is named after me. Oh and I've known the Prime Minister and Joe Biden ever since I was born. And I have one hundred trillion friends." - Bookpaw

"I am the centre of the universe" - Puddlepaw

"When in doubt, draw Tim." - Glassespaw

"i need to make sure that swifty gets her bush" - Maplepaw

"I am a god at Tetris" - Puddlepaw (dang, this guy is so arrogant)

'With all respect intended,pls shut up'-Snowo telling someone to stop in the nicest way possible

Coding Test by Swift - A sandbox place for me to test coding stuff and figure out how to code in general! (I can only code in Scratch XP)

Swift's Art Page - Some of my hooooorrible art!!!

Swift's Art Challenge - Some of my art/drawing challenges

Thanks for visiting my page, friend! <3