What do I say here--

I'm a detail-oriented, unmotivated freak who has an illogical brain yet likes logic. I do weird things for the sake of being quirky and standing out.

I had paragraphs here, but they are poof because yes.

Motivation, where did you go? I want you back~

Stormtail is a pale cream tabby she-cat (she could also be referred to as a sandy-colored tabby she-cat) with striking pale blue eyes.

My Warriors cats and BlogClan name is Stormtail (I used to be called Stormsong and Needleblaze). I am sixteen years old and I'm in tenth grade. I live in the U.S.A. with my mom, dad, and brothers. I have a brother who is two years younger than me, Sprucepaw/fall. Then I have another brother named Jaykit, an adorable toddler in the 99th percentile of head sizes!!!

My pronouns are she/her, and I am a cisgender, heterosexual/heteroromantic female ally who hates gender stereotypes with a passion.

I am a huge fan of the following things and more, in no particular order:

I want to be a published author, maybe, someday. I also think being a Twitch streamer would be super fun and a great passion. I am interested in editing, typing stories/fanfictions, or being an entertainer. (The Hobbies section is very similar, haha.)

(it was June, Pride Month)

Random Fun Facts About Me:[]

Add yourself here if you want to! :)

What Others Think About Me[]

I don't know about this section... I don't care too much for compliments, and my strengths honestly aren't important. But go ahead, I guess. :P 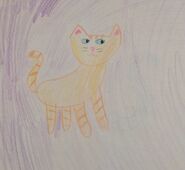