Shatteredpaw/mask is a jet-black she-cat with green eyes and white patches on her face that look like shattered ice. She has a thin scar over her right eye, on her left shoulder and has blood on her paws.

Languages I can speak-

She is obsessed with Mapleshade.

Her favourite OC is Highbranch (no stealing).

And her favourite MAP is Sol: Everything Moves.

She is filling out all these inbox things because they are so fun to do.

Don't have one (that would be weird)

The Ones That Got Away - on BlogClan 2 Wiki, unfinished

Speaking With Stars - in progress, on BlogClan 2 wiki

MAPLESHADE (most BlogClanners know that by now)

Reirei (I didn’t say they were all from Warriors)

Walk Without The Stars

On The Blog Edit

Ttera found BlogClan by randomly finding an article (credit goes to Nightwhisker who wrote the first article I saw, Firestar Is Related To Everyone and that’s what got me hooked)

She joined properly on March 1st.

You will find me on the fanfic page, sometimes the Tavern, the games page, and in nine role plays.

Redblaze who also should have found this way before

Turtle who doesn’t care what anybody else says, SILVERSTREAM IS GRAYSTRIPE’S TRUE MATE! (Turtlepaw/ dapple)

Ivykit who agrees with Turtle and doesn't like Millie 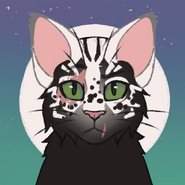 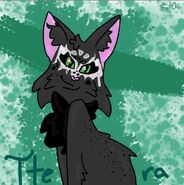 Ttera by the amazing Clo

Shatteredmask by the astonishing Goldenberry
Add a photo to this gallery

Shatteredkit was bullied by every kit and ‘paw in ThunderClan because of her strange appearance. She got really really mad. She was made an apprentic, and her mentor hated her. Her brother, Clawfire, was horrible to her when she got her warrior name. She eventually killed him, and most of her other tormentors. She was slaughtered by her mentor and went to the DF. Shatteredmask became leader of evil and won the second Great Battle.

I love the Cats musical

My birthday is October 21

My favourite cat is Mapleshade, but I also like Shadowstar

I think Tall Shadow is a better name than Shadowstar

My favourite Clans are the DF and BloodClan

My favourite musicals are Thoroughly Modern Millie, The Sound of Music and Cats

My favourite song is Macavity: The Mystery Cat but I also love My Lullaby

I accidentally typed that in third person

I plan on not trying to become a SW 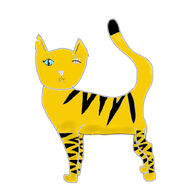 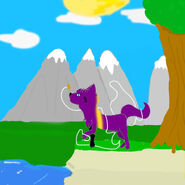 thumb|My OC, Anima.
Add a photo to this gallery
Retrieved from "https://blogclan-2.fandom.com/wiki/Shatteredmask?oldid=345963"
Community content is available under CC-BY-SA unless otherwise noted.