I BROKE THE TABBER OOPS

Scorchstar's Find is the first book in Sandy's fanfic series. It is by Sandy.

Scorchstar's find is about four apprentices called Scorchpaw, Sorrelpaw, Sunpaw and Olivepaw. They train until they find a abandoned camp. They play around and call it RockClan. But Scorchpaw thinks if she could make RockClan a real clan. Where does her destiny belong? P.S. DONT CLICKY ON THE LINKS SPOILERS!

These are all my OCs. Don't steal, please.

Here is the link to GRASSCLAN WIKI, where all the info is. You shouldn't click it, btw.

Goldpelt-golden tom with a brown stripe across his back

Scorchpaw-black she-cat with one white paw

Yelloweye-gray tom with a blind eye

Woah, this took me a long time to type 😛.

Scorchpaw leaped up the tree trunk. Excitement surged her paws. I'm an apprentice! she thought. I'm not scared of heights!

She leaped higher. They couldn't watch her fall!

Scorchpaw skidded off the tree trunk. Emberlight had praised her! It was the first time the GrassClan deputy congratulated her. She bounced up. "Thanks Emberlight!"

Emberlight nodded. "Your welcome." she mewed.

Sunpaw jumped a tail-length next to the deputy. "Can we do more tree climbing tomorrow?" she pleaded.

Emberlight twitched her ears. "I see why not." she mewed.

Being an apprentice is fun, Scorchpaw reflected.

Scorchpaw woke up, the greenleaf breeze brushing her fur. She yawned. Emberlight had promised to train more. She nosed out of the den.

Outside, cats were dozing in the greenleaf sunshine. She tried to spot Emberlight in the crowd. Then she did. The light gold she-cat was sitting near the highrock, chatting Nightstar.

"Emberlight!" she called. The GrassClan deputy turned around and stood up. She spoke. "Hi Scorchpaw. Sorry I can't train with you today. You'll have to train by yourselves, ok?"

She nodded as she turned to the apprentices' den. Why is Emberlight busy? Never mind.... She stuck her head in. "Let's train!" she yowled. "Emberlight is busy so we train by ourselves!"

The apprentices trained. They were almost warriors. But that's when Sunpaw ran off into the bushes. "Sunpaw?" Sorrelpaw mewed quietly.

Scorchpaw sniffed the air. "Let's follow her!" she suggested.

At last they came to a clearing there was a monster...bridge, that's what twolegs call them. Monsters roared. There was a big, tall rock, and rocks under the bridge. There were slight clicks there, like dens. Sunpaw was staring in awe.

"Woah..." Sorrelpaw peered around. "It's like a clan! What should we can it?"

Scorchpaw took a deep breath. with Rock-like dens, this will be RockClan.

She raised her head. "Let's call it RockClan." she decided.

"And at last, you will be Olivepelt."

They cheered. Scorchpaw smiled. It was fun playing as a clan. A sudden thought went off her brain. RockClan will be a real clan? Then she laughed. No way! They were enough clans already.

She blinked. "We should go. They would be looking for us." As she left the camp, she looked back. Maybe I can, will be known as the greatest leader.

Scorchpaw walked to Emberlight. She plastered a fake smile on her face. "Can we do tree training again?" she lied. For a few days, they had visited RockClan. Emberlight was suspicious now. She twitched her ears. "Ok." she mewed.

They padded out of camp. As soon as they reached the tree-climbing place, they rushed to RockClan camp.

Scorchpaw leaped onto the highrock. "We will start by-"

A yowl interrupted them. She froze. A black she-cat came along with a gray tom.

What was the GrassClan leader doing here? Fired blazed in Nightstar's eyes. "What are you doing here?" she spat. "No matter you're been making excuses! Emberlight was right! You're disloyal. You will all clean the elders' den for two moons! Until that, you won't leave the camp!"

Scorchpaw was so angry at herself. Then she suddenly thought. If I had my own clan, leaders won't punish me! I will make my own clan! She had made her choice.

"Scorchpaw, from this moment you will we known as Scorchclaw."

Scorchclaw proudly stared the clan. After moons of cleaning dens, she had finally become a warrior. Olivebranch had too.

She whisked her tail. She had cringed at the words 'do you promise to uphold the warrior code and to protect and defend your Clan, even at the cost of your life'. She was going to make RockClan, so she was disloyal.

She padded to the warriors' den. She will hold a meeting for cats to join. Olivebranch was padding in last. "Psst!" she whispered. "Wake Sunshine and Sorrelspots! Tell some of our clan too. Tell them it's a meeting at the training hollow."

The young warrior nodded. He started to call softly. Scorchclaw rushed off.

Many cats had come. They looked confused.

She cleared her throat. "Many of you are wondering," she mewed, "why I have called you here. It's because I'm going to make a clan called RockClan. I have found a camp and territory."

Many cats joined in. "Traitor! Traitor!"

Scorchclaw angrily lashed her tail. "Ok. Who's with me?"

Sorrelspots was first to emerge. She dipped her head. "I'm with you, Scorchclaw."

Sunshine nervously padded from the crowd. Olivebranch followed a tail-length behind her.

Oakleaf sadly padded next to Scorchclaw. Swallowstrike rolled her eyes.

I will make cats join, she thought. RockClan will be the greatest clan!

She had received her nine lives recently, and Icestar and Emberstar weren't happy. Amber and Scott were expecting more kits.

Inside, three kits were mewled as they suckled. One was white, another was splotched brown, and the last was orange, black and white.

Scorchstar lifted her head. "Do they have names?"

The ginger queen lifted her head. "Oh yes. The white one's Snowkit, the brown splotched one is Plumkit, and the last one is Orangekit."

Orangekit. The tiny kit was mewling, so strong and powerful. This kit had a good future. I hope one day he leads the clan. 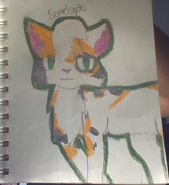 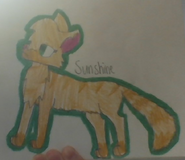 Sunshine by Sandy
Community content is available under CC-BY-SA unless otherwise noted.
Advertisement