Blueflower is a short, blue-silver she-cat with dark blue-gray patches, swirls, and dots. She has blue eyes and a stumpy tail. She uses she/they pronouns.

Blueflower is nice and funny with a creative streak. She can be sarcastic but tries her best to avoid hurting others' feelings. When she's annoyed, which she admits happens often, she can be snarky. She cares deeply for others, especially in terms of advocating justice. Her sense of humor is pretty random. She also tends to be shy and quiet around new people and is usually the voice of reason in her chaotic friend groups. She also has a tendency to be very loud but isn't aware of it unless told.

Blueflower joined the blog, as Potato (which she is more commonly known as), on January 22, 2018. She's had three clanniversaries now!

She joined as an apprentice and never looked for a mentor. But as a warrior she has now had two apprentices, Seti, and her current, Tigerdawn!

Blueflower tries her best to be active, but she has gone inactive before. She mostly lurks and posts the most on on the art, tavern, and anime pages. She was also in quite a few roleplays, however most died.

By the awesome and insanely talented Tigerdawn!!! 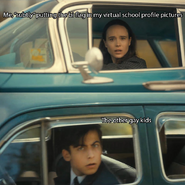 By me I swear I'm really funny

SPOILER ALERT you're all my friends <33333 You can add yourself!!

The coldest of them all, Coldie <3

I've seen a couple people add this lol so write what you think of me I guess! I expect five stars from literally everyone (i'm kidding this is a joke 😛)

Five stars :p you're amazing at art and writing really Potato! ~Bri (Potato edit: Thank you <33!!! And you're an awesome writer too!!)

*Five million stars* Potato is such a helpful, friendly spirit! She always has something funny to say, and seeing their comments always makes me happy. Her art posts and the improvement I see has always motivated me to draw, and I cannot thank Blue more for being the awesome, caring person they are. <3 ~ Coldie (Potato edit: Thank you, that's so sweet! And thanks for switching the pronouns, it's really helpful as I'm trying to figure this all out! <33)