Amber
haired dark brown tabby she-cat with a cream belly, chest, paws and muzzle, legs that are a tiny bit longer than usual, a dark brown M on her forehead, dark brown ears, a fluffy tail, cheeks and belly, and amber eyes with a brownish tint. 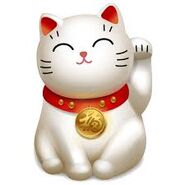 On the blog[edit | edit source]

Mapleheart originally joined BlogClan on Dec. 8, 2013 under the name Brightsky. She roamed the blog for a while, but left after seeing someone with the same name on an older post. She then rejoined on Mar. 12, 2016, nearly three years later, under another name. She checks the Tavern and Fan fiction page every day, listening in on everyone's doings. Mapleheart also looks at the Name Generators page, and participates in some, coming up with wonderful characters. She feels as if she's not participating enough, so she tries to reply to a lot of people, though laziness drags her down.

Mapleheart can be lazy and impatient at times. She is quiet and relaxed most of the time, but sometimes she cannot stop talking or running around.

Retrieved from "https://blogclan-2.fandom.com/wiki/Mapleheart?oldid=351995"
Community content is available under CC-BY-SA unless otherwise noted.