Iceflower is a soft-furred black she-cat with a white chest, paws, tail-tip and underbelly, a long, plumy tail, and bright lime green eyes.

Ice is kind, intelligent, fun, and amazing to anything around her. She is a bright light in this world. Listen to her, always, and never doubt that she is fabulous. ~ Winterwhisper

She's almost always on the Live Chat, and she enjoys reviewing warrior names, name generators, and oftentimes reads the fanfiction. She is a Senior Warrior, and officially became Goldenpaw's mentor February 4th, 2017.

She's a member of the BlogTeam and the Birthday Tsar on BlogClan, as well as a chat moderator. She's usually hanging around behind the scenes of BlogClan like the creepy stalker she is. (But she really isn't creepy. She'd love to be your friend.)

She's never written or edited a chapter, but she hopes to. She had a cameo in Chapter 17, written by Meadowpaw. Her name is currently in the Jar, as of February 2017. 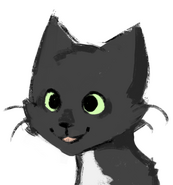 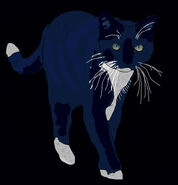 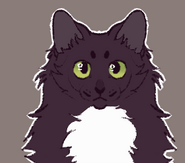 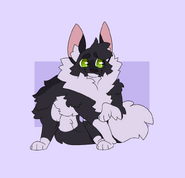