Gracepaw, or Gracey/Gracie/Gracy/Grace, is an apprentice of BlogClan. They hope that you can get to know them better by reading this page <3

This page is still in progress. I'll try to update it when I can, but sometimes I don't have the time.

This page was coded by the wonderful, one and only Willa with the help of the coolest, charming celebrity Coldie and yours truly, Gracey!

N/A on the blog

Gracey goes by any pronoun except he/him, and prefers they/them or she/her. Their gender is questioning, although they think that it's probably bisexual.

Gracey's first mentor was Crystalstorm, although (I believe) he hasn't been seen in a long time. Their current mentor is the one and only Dovestream, who ran for medicine cat in the 2021 elections. They are still an apprentice, and therefore have no apprentice yet.

Gracey is a big Warriors fan, and during the corona pandemic, when they had just gotten into middle school, and was lonely alone at home, they happened to be cruising the web, searching 'Warrior Cats' and 'Kate Cary' and whatnot when they happened to stumble across BlogClan. They were intriuged, and tried clicking the link, scrolling through several of the pages, and felt a sudden connection. They felt like they had to join and that this was the perfect site for them.

Gracey's first comment was on the Say Hi/Please Introduce Yourself page, on August 31st, 2020, which means that Gracey has almost been on the blog for over a year if they hadn't been inactive! Gracey started off with Blossompaw/sash, who is their best friend, as Gracepaw/splash. However, Bloomie the Cheezits Master (I think she was called that) went inactive for quite some time, although now she's back as Koalapaw. Gracey was often on many pages at once, and quickly became close friends with Dovepaw, who is Dovestream while xe was an apprentice, and Rainpaw (Formerly Rainsong but currently Raindance). They participated in Coldheart's clan, SnowClan.

There was a period of inactiveness, because they had to move away to a different place.

When they finally got back, they were on-and-off, because they weren't exactly settled down. Only around the middle of June did they become active. They happily became mentor and apprentice with their friend, Dovestream, who was now a warrior.

Currently, they run a game called Gracey's Games on their secret page.

A birthday post has been created for Gracey. They have had no clanniversary posts on them.

Gracey joined on July 7th 2021, as Gracey The SplashWing :D

Mostly they're active on their own page, their own fanfiction page, and their AU page.

The background for this page, made by Gracey, has double meanings:

Gracey doesn't exactly know what their personality really is, but on the Myers-Briggs personality test they are a ESFP. On the Allignment chart they are Chaotic Evil. *cue the evil laughter* They think they can be a leader-type, proud, stubborn, and independent, but also very, very lazy. They also always love pulling pranks on their friends. Gracey tries to be sassy and funny, but personally they think they're spectacularly failing. They're an escapist and procrastinator... They're a multi-tasker (ugh I should get the record for the shortest focus period of all time). In real life, they're really prickly and defensive, but (probably?) a cinnamon roll underneath. They tend to be the younger sibling kind of person, as they're always getting headpats from taller peers. They think that are the "Storm before the calm."

On the BlogClan Allegiances, Gracey's purrsona can be seen listed as a night-black she-cat with aquamarine eyes and pale gray hind paws.

Gracey is as follows:

They think that they would look like this if their purrsona was a real cat:

Frostbite - Lean, shaggy-furred very pale gray cat with sharp, silver-flecked blue eyes, long, ugly gash going across inner side of front right leg, 2 gold loop earrings on left ear. (all pronouns) Scathing, cold, silent, observant, dry-humored, sharp, and quick-footed. He's always been a rouge. Sure, she's raided the clans a couple of times, and has a bad reputation, but fey're always one step ahead of the clans, meaning they can't be caught. Ey and Eclipse have an arranged marriage, as Eclipse's parents need the area leader, Frost's permission to be on the "safe haven for rouges", which also happens to be Frost's territory. Hir nickname is "Rouge" as ze sometimes comes back covered in blood.

Eclipsekit/shade - Long, soft-furred black she-cat with gold and white splotches with light blue eyes. (She/her) Witty, quirky, not big fan of physical contact, lone, prefers to keep to self. She's actually a spy for her rouge band leader parents, sent in as a part of a mission to learn more about the clans and their strategies. However, the Clans do not know this. She doesn't get along very well with her older brother, Brittlethorn, who is also part of the plan. The two look nothing alike as Eclipse is similar to her father while Brittle is in-between.

Lakekit/sight aka Swiftnose (the two are exactly the same, just different names and backgrounds) - White she-cat(s) with gray splashes (dual mask and flank), emerald-green eyes with a scar over right.

Food: Curry, Chocolate (sweets in geneeral), or Sweet baked yam. It's a tie.

Don't be shy, add your name to this section! Gracey considers everyone their friend <3

Gracey by the rad Rainy! 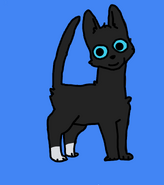 Gracey by the spectacular Snailmoth for their birthday post!

Gracey by the wonderous Whirly for their birthday post! 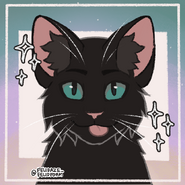 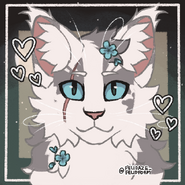 Gracey's OC, Lakekit/sight by Picrew! (They messed up, her eyes were to be green) 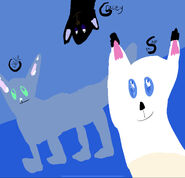 Gracey, Coldie, and Stormi by the fabulous Freefle! 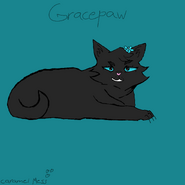 Gracey by the dazzling Drizzlepaw! 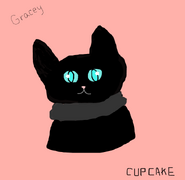 Gracey by the really friendly Frosti! 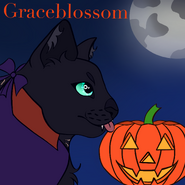