Coldie made this page for Diamondclaw.

Diamondclaw, more commonly known as Diamond, is a Warrior of BlogClan.

Diamondclaw: A pretty, lean black she-cat with a white-tail tip and chest. She has striking blue eyes and a gray nose.

Diamond came to BlogClan after I, Coldheart, pestered her into coming. She joined on a day I don't remember, and her first apprentice was Poppypaw. However, because Diamond became inactive, Poppypaw got a new mentor, and when Coldheart told her this, she was happy for Poppy.

Diamondclaw is a semi-sarcastic, funny person who loves joking around. She can be fierce and argumentative, and sometimes when she doesn't get enough sleep, she is cranky after. (Coming from personal expreience ;) )

- She lives with three cats and a dog 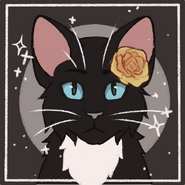 Diamondclaw from a Picrew maker! 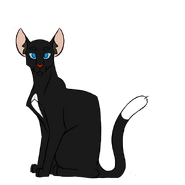 Diamondclaw from a Picrew maker!
~ Coding by Coldie! ~