Fern green
Dawnmist is a petite, grey tabby she-cat with fern green eyes. She is not particularly pretty or stunningly beautiful - rather plain looking, in fact. She has a slender figure, big feet and a plumed tail. Her markings are quite subtle, and follow a vague classic pattern, and her fur is soft and long, tufting at the tips of her ears and on her chest. Her fur is lighter around her muzzle and underbelly.

Dawnmist is the former medicine cat of the blog. She posted fairly often, and liked to debate Doctor Who. She also joined the first roleplay site, and created the second after its abandonment. She won many awards for her characters, and was loved by all.

Dawnmist returned to BlogClan not long before the verdict of the 2015 elections, however she still agreed to step down, and the role of Medicine Cat was filled by Kat in her stead.

She is an admin of Live Chat, and can be seen there quite frequently. 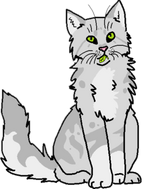 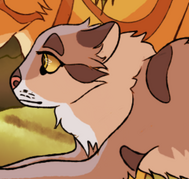