Copperclaw is a light brown spotted tabby she-cat with bright green eyes and a white paw and white tail tip. She has a scarab marking on her head. Her muzzle and belly fur are paler than the normal brown of her fur. She is strong, lean, and tall, with long, thin legs that hide a whole lot of muscle and small, but powerful, paws. Her tail is long and thin, her claws long, deathly sharp, and, for a reason she never explains, copper-colored. Her whiskers are rather short and her nose is a relatively pale pink.

Copperclaw is the former deputy of BlogClan, as well as a former moderator. During her time, she was an active and well-loved member. She created posts and such to help Kate and Hazelburrow. She was friends with almost everyone in BlogClan, and was very close to Rainsong and Kat. She was also an administrator of the former roleplay site, winning many awards for her characters.

She has drawn many headshots of BlogClan fursonas, as well as pairing photos. She uses a Paint program and has done a tutorial. 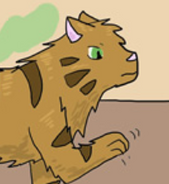 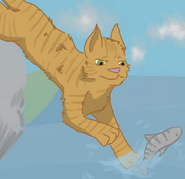 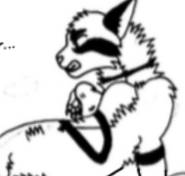