December 4, 2018
Complete Fan Book of Cat Breeds in Warriors is a book that all the BlogClanners can join and write a part of it. In this book, we'll find out the breeds of the characters in Warriors. 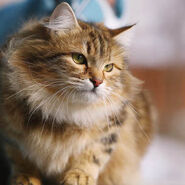 Ah, Hollyleaf. She's an amazing cat, my favorite. Let's see what breed she is.

First, Hollyleaf is long-furred. That might make her a Norwegian Forest Cat, a Persian Cat, a Maine Coon, a Ragdoll or a Siberian Cat. Although she might not be a Persian Cat, because they have a round face and short muzzle.

Hollyleaf will probably be a Norwegian forest cat, because of her long legs. She probably won't be a Ragdoll, because Hollyleaf is black with no gray and white patterns, neither blue eyes.

She wouldn't be a Siberian cat because they are strong with large paws, and Hollyleaf doesn't.

I hope you enjoying reading my chapter of Hollyleaf's breed! 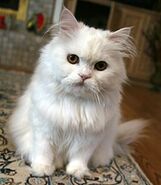 A REAL Maine Coon :P (not Sandy's fursona)
Add a photo to this gallery

In the book it describes Yellowfang as a black she-cat with a flat face. There are two distinctive breeds she could be.

Brokenstar is a flat-faced, dark brown tom with amber eyes. Since he is the son of Yellowfang, he is likely at least half Persien, because of his heritage and features.

Needletail is a sleek, short furred silver she-cat with a white chest, green eyes, and a thick tail, as described by the Warriors wiki. However, silver is not an actual cat color, and instead is similar to coat colors such as blue self, chinchilla, silver shaded, silver tabby, blue silver tabby, etc. While researching short haired cat breeds, as Needletail is often described as short furred, I came across a single breed where “silver” was an acceptable color. This was the Abyssinian. Now, I understand that Abyssinians are almost always the ginger color officially called sorrel, red, or cinnamon, as well as the red ticked tabby. However, all major associations accept and show silver colors, except for the CFA.

Silver Abyssinians are the usual brown tabby, but with the base coat to turned to a shining, silvery white by the inhibitor gene, though I will prefer not to get into genetics. However, I find this interesting, because Needletail’s father is a dark brown tabby, and white a dark brown tabby is not a recognized color of the Abyssianian breed, it seems like the basis of any sliver Abyssinian, such as Needletail. Her mother, Berryheart, is black and white, which means that she probably has another breed of ancestry.

However, I also think that Needletail has Somali ancestry. While the Somali is a long haired breed, it is arguably a mere variation of the Abyssianian, or usuallly just refered to as the long haired version. While Needletail is clearly not long-haired, she does have the thick tail of a Somali cat. The FIFe, TICA, and GCCF in the United Kingdom all except silver colored Somali cats, making the Somali and Abyssianian the only two cat breeds I have come across where “silver” is a registered color. To be clear, they cannot be black and white, so Berryheart was not a Somali. However, that is a topic for another day. In conclusion, this leads me to believe Needletail - one of my absolute favorite warrior cats - is an Abyssianian, with Somali ancestry (for the most part).

A silver Abyssinian cat, but with an oddly fluffy tail. 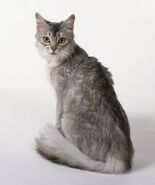 A fluffy, long-haired, silver Somali cat.
Add a photo to this gallery

Leopardstar is a very interesting character and I would definitely want a SE of her. Let’s see what breeds it is possible that she is. First of all, Leopardstar is spotted. Spotted cats are Bengal cats, one of the most adorable types of cats. Now we move into a more difficult thing. Leopardstar was also mentioned to be golden. The problem here is what describes a golden cat. Golden is something between brown and ginger, at least this is how I see that. If will look at Leopardstar’s oficial art we’ll see that she was simply shown as ginger tabby. But we go by Leopardstar’s written description, right? So Bengal cats can have shades of anywhere between gray (yes, there are some not purebred gray Bengal cats), brown, and ginger. So we can tell that some of them are golden, I guess. So it definitely makes Leopardstar a possible bengal. But Leopardstar was mentioned to have a winding tail. Winding means long. So here is the problem – Bengal cats are short haired. But here is the thing that saves us: Leopardstar isn’t purebred. Her mom is ginger and white (definitely not a Bengal) and her dad is brown spotted, so we can assume he’s bengal. That makes sense: Leopardstar got her Bengal gens from her dad, and the long fur from her mom. That’s it! Cloudy, signing out.

Tallstar is a large cat with a long, thin tail and short, thick fur.

WindClan cats are described to have good hearing, and they probably need to have thin, long legs to run quickly.

There are two candidates for his possible breed that I can think of that are tall, have long legs, large ears and a very thin tail that is long.

Tallstar is described to have a short but thick coat, and Cornish Rex cats have curly fur that looks thick. Cornish Rex cats are small-to-medium-sized cats, but that have very long legs which makes them look tall.

It could be possible for Tallstar to be an Oriental, as they tick almost all of the boxes, if not all of them. Oriental Shorthair cats have a short but fine coat that is quite thick in appearance.

I’ve even seen Tallstar being depicted as an Oriental in some fan-art!

Overall, either breed could belong to Tallstar because they have very long and thin tails and legs, which make them look tall and athletic.

A black-and-white Cornish Rex cat. This is a Stock Image.

A black-and-white Oriental Shorthair cat. This is a Stock Image.
Add a photo to this gallery

Spottedleaf's detailed description is this: Spottedleaf - small, lithe, soft-furred, dark tortoiseshell-and-white she-cat with large, warm, amber eyes, and white-tipped ears. Her coat is distinctively dappled and mottled with orange and brown markings, and she has a small, pink nose. One of her eyes is rimmed with darker fur than the other, and she has small white paws and a black-tipped, gold-and-brown-striped tabby tail. Possible breeds: tortoiseshell breeds: American Shorthair, British Shorthair, Persian, Cornish Rex, Ragamuffin, and Maine Coon. Let's eliminate Maine Coon, Persian, and American Shorthair. That leaves us with the British Shorthair, Cornish Rex, and Ragamuffin. I'm going to eliminate Cornish Rex because the Cornish Rex has veryyyyy short fur, and I don't think it's really soft. Spottedleaf doesn't have short fur, but she isn't said to have long fur either. I'm going to presume that she's a mix between a Ragamuffin and a British Shorthair. She must have British Shorthair blood in her because British Shorthairs usually have amber eyes. 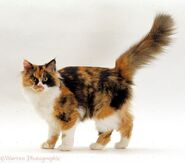 A British Shorthair!
Add a photo to this gallery

Silverstream's a sleek, soft, and thick-furred, slender, silver-and-black tabby she-cat with a finely shaped head, and bright blue eyes. So she's fluffy, so that means she can be a Norwegian Forest Cat, a Persian Cat, a Maine Coon, a Ragdoll or a Siberian Cat. She's probably not a Persian because Persian's have flat faces, she's probably not a Norwegian Forest Cat because they usually only have blue eyes if they have white pelts, and she probably isn't a Maine Coon because Maine Coons are super fluffy and have tufted ears. She has to be a Ragdoll because Ragdolls usually have blue eyes, and she could have Siberian blood in her because Siberian's could be silvers. Siberian's also look like how Silverstream might look. So, in conclusion, I think that Silverstream might be a mix between a Siberian and Ragdoll.

A Ragdoll!
Add a photo to this gallery

My first time writing this, not sure if it should look like this :3

Tree is known as a small, thickly pelted, muscular, bright yellow tom with amber eyes, and six toes on one of his hind paws. Okay let's ignore the six-toed part because it's not necessarily related to breeds. Okay, so, he's small, which means he might be a Singapura, Munchkin, American Curl, or Siamese cat. He might not be Munchkin because he is thickly pelted instead of fluffy, might not be Singapura because his tail's not blunt and might not be Siamese because he is muscular. He looks much like an American Curl on the official art, so I think he might be an American Curl. 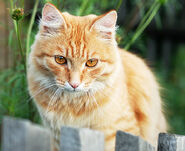 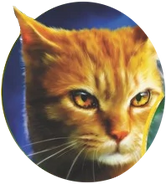 Tree's official art.
Add a photo to this gallery

Ivypool is a slender, soft-furred, pale, silver-and-white tabby she-cat. She has white paws, a white belly and face, white splotches covering her pelt, a striped silver tail and silver tail-tip, sliced ears, and dark blue eyes. I'm guessing she has medium fluff, so like 5/10 fluffiness. I'm thinking she could be an....... American Shorthair, British Shorthair, or an Egyptian Mau. This is really narrowing it down, so I might be wrong. She could still be an American Shorthair, but I'll cross of British Shorthair because that doesn't seem like her, and finally, she couldn't be an Egyptian Mau because they usually have gooseberry green eyes. So she is probably an American Shorthair!

Retrieved from "https://blogclan-2.fandom.com/wiki/Complete_Fan_Book_of_Cat_Breeds_in_Warriors?oldid=356366"
Community content is available under CC-BY-SA unless otherwise noted.