Coldheart, more commonly known as Coldie, is a warrior of BlogClan.

Coldheart: A beautiful, slender, agile silver she-cat with big, energetic green eyes flecked with gold, a long, fluffy tail with a gray-blue tail tip and snow-white ears. Fey has white paws flecked with gray-blue flecks and skinny wrists, the right front one with a small scar, long legs with a small scar on her left back paw and a big scar near her tail tip, but barely visible. She has sleek, soft fur and a petite, strikingly pink nose.

Although fey is a Maine Coon, they do not have tufted ears or a ringed tail, and she is smaller than a usual Maine Coon, and her fluff is shorter too. However, she does have long whiskers, a broad chest, a finely shaped head, and slightly longer than usual ears. Her body fluff is a lot more shorter than her tail fur, like a Siberian's. She has 2/10 fluff, and feir tail fur has 10/10 fluff. Unlike a usual Siberian, they also don't have any stripes. But fey do have strong hind legs that are slightly longer than her front legs. She is elegant, and has long legs and body and vibrant eyes from her Russian Blue ancestry.

I love reading and giving feedback on articles! I've also made a bunch. My first one got published on January 5th, 2021.

I love exploring the Blog, so you'll most likely see me everywhere! I usually go wherever the Recent Purrs take me, and I've taken over Recent Purrs too many times to count.

I made my own RP, called SnowClan, which is now cancelled due to inactivity and almost no spice. :`C

I've attended a Gathering in 2020, where I was on the superior team, the Sparkling Seals! I hosted the first game on the first day, called Coldheart's NTA with a Twist, where I was filling in for Maplekit. I missed the second Gathering in June, 2021, but my team, the Cantankerous Clownfish, still won. I was also supposed to host a game, but since I missed the Gathering, I didn't. :C Another Gathering hosted in the summer of 2022 I also attended, playing a couple of games and chatting a lot. Sadly, my very beautiful streak of my team winning the Gatherings was lost, and the Charismatic Cockatoos, the team I was on, emerged (battered, bleeding and bruised, fighting until the end) in last place.

On BlogClan, I try to be as active as I can. Members of the Blog are always welcome to strike up a conversation with me, or ask for help. I will gladly give any help I can to anyone!

I joined the Wiki on November 25th 2020, and I'm sure glad I did! I love the Wiki and all its friendly members. I made my own page, and the spectacular Ebay coded it for me. A while later, after I found out how to code properly, I coded it myself. :P It took me a while, but eventually I learned how to code! Now I code pages for users to the best of my ability. On the Wiki, I like to edit pages and make fanfictions. If you have any questions or need help with anything, I'm always glad to help! Just pop me a message on my Message Wall. :)

Overall, I try to be kind, caring, helpful and funny. I first start out to be shy and quiet, and then once I feel like I know you, I open up and become more friendly, sweet, silly, and caring, a little weeny bit bossy and talkative.

I hate to be excluded, and I'm very upset when I am. When I get angry, I am very annoyed by everything, so it's best to just let me calm down.

It is said that I possess the qualities of cleverness, wisdom, wit, intellectual ability and creativity, as said all Ravenclaws possess. I am also stubborn, a bit rebellious and determined, and I do not like being told what to do.

I am very fierce and protective, and I care about those I love greatly and often put their wants and feelings before my own. I am a perfectionist, and always try to do everything to its fullest. I can be defensive, and sometimes I can seem a bit judgy or even harsh when I'm in full-on defence mode.

I have a ENFJ-T personality!

Just put in whatever you feel like putting in!

"This is a petition to remove viper from the Recent Purrs, any takers?" ~ Silverheart

"This is a response to Silverheart: Of COURSE!" *signs name in enormous letters* ~Willowsong

"For anyone who is new:

"Ah yes, the floor here is made out of floor" -Daydust when they see somebody pointing out something obvious

"I am a monkey" -Daykoblin (daydream)

"And it's depressing so I'm being a sad little dump right now." ~ Me talking about a song

~ Coldie to Viper on Discord

THIS BOT IS CREEPY"

~ Coldie about a Truth or Dare bot(now renamed Creepy Bot wants your secrets, as it deserves, thank you Thist) on the ArtClan server on Discord

"I think we already heard the creep say that"

~ Coldie about the Creepy Bot again

"Don't worry I luv creepy." - Mosskit/fire in answer to Foxi

'the floor here is made of carpet"-Snowpaw/storm

"I HATE YOU LUIGI" -Daydust

Please feel free to add yourself!

Flowie (or at least she hopes) (Coldie edit: You're a fantastic friend! <3)

Briarpaw/blaze (thinks maybe not as procrastination hurts her art)

Daydust, who is nervous to put their name here (Coldie edit: Don't be! Ily Day. 💙)

Coldie is always ready to help and there when you need her. She is also an excellent coder and somehow doesn't get all annoyed with people constantly showering her with questions and requests. ;) l <3 her, and really hope she'll let me be her new apprentice ;) She's also helping me learn to code! ~Willa

Ahhhh hello Coldie! Coldie is great! She coded my page for me and taught me how to code. Many people ask and she always replies kindly. Ty Coldie! -Briarpaw

(Coldie edit: Thank you, Bri! You're a really passionate person and I enjoyed teaching you! <333)

Coldie is nice and amazing and means so much to the Blog! It wouldn't be the same without her! ~Piloot the Pirate

(Coldie edit: Thank you so much, Daze! Same goes for you aksjdjfvjf. <33)

I love Coldie so much! She helped code my page and make it more bootiful than it was and I'm so happy! She went out of her way to help me and she is highly appreciated! ~Pilot Againn

Coldie is so kind and sweet and helpful, and overall fey is an amazing friend. The blog truly wouldn’t be the same without her! (Also they’re AMAZING at coding) —Juju

(Coldie edit: Thank you, Juju! You are an absolutely fantastic friend and I love you so muchhhh <33333)

Coldie is very kind and friendly! She is an amazing person and amazing at coding! -Dandelion

OKAY OKAY OKAY WAIT no how can I get all that’s awesome about Coldie to fit into a few sentences? Ahhh Coldie is super sweet, helpful, kind and just all around a great person and friend. She’s really smart and great at coding, art, writing and literally hundreds of thousands of other things. The Blog would be empty without you Coldie! ~Free

(Coldie edit: Ahhh gosh I want to hug you so much right now! That is so nice to see you say that about me. <33 Thank you!!)

Wait you can do this?? Coldie is very sweet and fun. She is always willing to extend a helping hand to anybody and fills up lives with her warmth! She's clever and knows a bunch of stuff, and is nice to talk to! - Snowy ^^

(Coldie edit: SNOWY oh my gosh I still remember the first time we chatted! You are such a friendly and understanding person, and I thank you so much for welcoming me so cordially when I first joined the Blog. You made me feel super awesome(and still do), and I will always remember that! <3)

Coldie is so nice and welcoming and a wonderful coder! It's been really nice getting to know her and the wonderful person she is, but unfortunately, she will never beat me at <[[1]] because I'm just too good. Ily, Coldie! You are amazinng! ~Pilot for the 3rd time <333

Omg how did I forget to say awesome things about Coldie?!?! She's an amazing artist and person and we're lucky to have an awesome warrior in BlogClan!! Thank you Coldie for everything you've done for me!!!!!!!! <3333 -Minty :D

(Coldie edit: Aw, thank you to you, Minty, for everything you've done to me! You're a really bubbly, helpful and kind person and it's been terrific knowing you! <3)

Coldie has very good coding skills and really deserved to be a senior warrior!-Snowwy

Coldie is helpful, friendly, modest, sweet, generous, passionate, smart, cool, and very talented!! She makes AMAZING art, her articles are really fun and interesting to read, (She does a great job defending her favorite character and favorite ship, while remaining polite and kind to other people and their opinions) and her fanfictions are beautiful; extremely well written! Coldie is a brilliant member of BlogClan, I couldn't imagine it being such a great place without her! I hope she becomes senior warrior, because she deserves it so much! Also, Coldie is the BEST MENTOR EVER!!! -Mounty C:

(Coldie edit: MOUNTY WHENEVER I READ THIS I LITERALLY CANNOT REPLY BECAUSE I HAVE NO WORDS. No words can describe how unbelievably magnificent you are! You're undeniably the BEST APPRENTICE EVER! You don't even have to try, that title is yours forever. Everything about you is incredible and inspiring!! Thank you for being my apprentice!!! <33333333)

I have never really engaged with Coldie, but I've seen them around a whole bunch! She is oh-so kind and generous and they are very easy to vibe with on my standards! She is amazing at coding and is very good at drawing too! I feel like the Blog would be rather empty if she ever left, and I would miss her greatly. I think I say this for all of us BlogClanners when I say we love you Coldie, and we are all proud to call you our friend! <3 - Keeko(Thriftheart)

SImply awesome, haven't interacted with them much, but they seem really kind, keep on being yourself, Coldie! -Daydust

Coldie is an amazing person and coder! I mean- have you seen her sandbox? - Rabbitpaw<33

Coldie is so kindhearted and empathetic! Her fanfictions are so clever and awesome. Have I mentioned how great she is? :D ~Mounty again

Coldie is a amazing older sister and a great friend!-Snowwy again

(Mounty edit: Coldie is a very talented writer, these stories are epic! Recommend reading :D Also, am I vandalizing your page too much? C:)

(Coldie edit: MOUNTY AHHH ABSOLUTELY NOT THANK YOU THANK YOU I REALLY APPRECIATE IT!! <333 Your stories are all so awesome and well-written, EVERYBODY GO READ MOUNTY'S FANFICTIONS.)

I have some OCs, in different Clans, but here are a few of my favourite OCs and some of my favourite OC Clans that I made up on the spot. Chances are I'll take a few characters and Clans out of here and use them in Art Fight or a fanfiction, but definitely not all of them.

Silverstar - pretty, large and muscular silver she-cat with a white tint on the top of her head, a black star mark on her forehead, a black nose and a scar across it, and amber eyes

Halfsun - half black, half yellow she-cat with a red chest and one brown eye and one green eye

Art of my characters 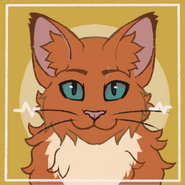 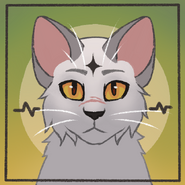 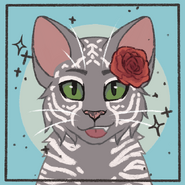 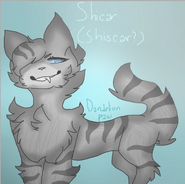 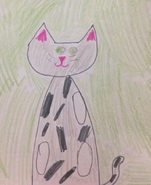 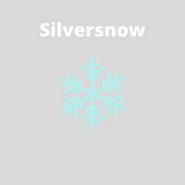 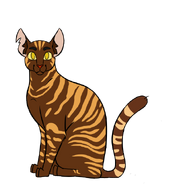 My OC Dei by Creekkit!

Gallery of my pets 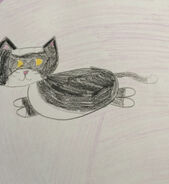 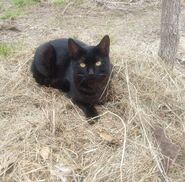