I am active (I hope) and I'm most commonly seen at the hug page, or commenting at fan articles! I'm also leading my own rp Clan, CloudClan!

How I found warriors[]

I was at the library and I saw a book with a cat on it's cover and since I'm a crazy about cats I just grabbed that book. Then I read the back cover and was like 'I need to read it'. Then I realized it's the third book in the series, so I knew that Redtail died when I started to read into the wild. Oops!. Fan fact: after forest of secrets the books stopped translating to my language so I ordered them in English. In still doing so!

I was just scrolling through the warriors wiki pages because I was bored, and clicked the 'random page' button and it leads me to a page of 'social media' and there was Kate's blog and it sounded super cool so I joined! I joined somewhere at December 2018 I think.

Add your name below! Be cool and add an emoji 😊

What people say about me[]

Add what you think of me!

"Cloudy is really really awesome and is super good at drawing!" ~ Sandy

"Cloudy is awesome and so kind! She draws really well! <3" ~ Crystie

"Cloudy is awesome and the first person who read my stories on Wattpad, and I was so excited when I found she was on BlogClan! Great friend. <3) -Raven

(Cloudy edit: you really made my day all of you!)

Pebbletail's Choice - started you can say?

Darkness - it's an entry to a contest I'll link it soon.

Forestwhisper's path - I finished the prologue

Well, here are random pictures of my cat, Kesem!

Kesem not letting me read my warrior cats book 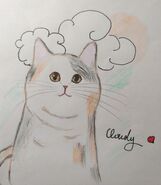 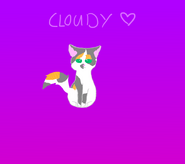 Coding done by the awesome Sandy!