Aster is a bit of a weird one. When you first meet her she's quite shy and self-conscious and can often come across as rude. However, once you get to know her she is bubbly and crazy and bouncing of the walls. She can spout technobabble at high speed while simultaneously dancing to latin pop, fangirling and swishing her imaginary Doctorish long coat.

(This is an interruption to say that Aster is awesome. ~Spidey out~)

Aster joined BlogClan on the 3rd of November 2017, commenting on the Name Generators Page with the name of Wrenwing. She discovered it on Silverpelt, another warriors website, where it had a link to BlogClan.

She is most active on the Warriors Game Page and the Tavern, Unfourtunately she is WAY to procrastinative to actually host a game, though she plays a couple of simple games like NTAs.

Her mentor is the amazing Loudfern!

On The Wiki[edit | edit source]

She joined on the 22nd of December 2017. Recently she has been a bit lax and isnt active very much.

Add yourself if you want ^^. Actually, add yourself. Stop me from looking sad.

Aquila would’ve love to have met you and discussed doctor who with you :P

For my Warriors Favourites, go below.

Movies: Forrest Gump, 1980's/90's/00's Romcoms, The Breakfast Club, Hunt for the Wilderpeople and The Princess Bride.

Number: 42 ( The meaning of the universe, how old Doctor Who was when it returned and I was born, a Doctor Who episode)

Name She's Come Up With: Deeptide

TV Shows: Doctor Who, The Big Bang Theory, The Middle 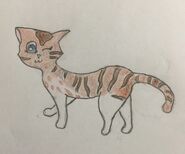 Me, drawn by my Secret Santa!
Add a photo to this gallery
Coding by Loudfern (Thank you Loudy! :3 )
Retrieved from "https://blogclan-2.fandom.com/wiki/Asterflame?oldid=355418"
Community content is available under CC-BY-SA unless otherwise noted.