When you first meet her, Appleflower can come off as distant and serious, and sometimes unapproachable, although she tries to seem friendly. This is because she is very shy around new people, and she worries about what they will think of her. She has very low self-esteem, and she gets anxious and worries a lot. She doesn't talk to newer members much because of this, but when you get to know her, you will learn that you cannot get her to shut up.

Around her friends, Appleflower is talkative and friendly. She is ambitious, and a hard worker. She's a lot more outgoing around people she knows, but she's trying her best to loosen up around new members too. But please do not hesitate to come over and start a conversation with her; she would love to talk to you and get to know you better!

Appleflower has not yet been featured in Trailing Stars.

What Others Say About Me

Right, here, you get to (vandalize my page) and write what you think about me! Please be respectful!

"Appy is awesome! She knows just how to make you feel better when you are sad." - Dovepawww

She welcome me when I first joined in May! She is amazingggg. NOW GO BE FRIENDS WITH HER :D - Cindy ;)

Appie is kind, funny, and friendly! She is best Frosty Queen and super fun to hang out with! - Snowy :D

Appy is honestly so kind, popular, and funny and nobody can deny that :) - Ebay

Apple is a very creative and intelligent person, and she honestly creates some of the best roleplay characters! :P -Goldenbee🐝

SILVER IS AN AMAZING FRIEND AND I LOVE TO TALK TO YOU ON DISCORD AND DJGHDSJH I CALLED YOU SILVER I'M SORRY MY BRAIN CAN'T HANDLE NAME CHANGES -Moons cannot compliment properly :') (SJDKAKDJSS ITS OKAY MOONS YOU CAN CALL ME SILVER WHENEVER AND YOU’RE A FANTASTIC COMPLIMENTER <3)

appledapplewafflesaffle is incredibly easy to bribe but i’m glad to be her friend and ily - plumber (Well you offer such good deals - can you blame me? - Appy)

"HAPPY KIWI" - Viper (And totally Snowy) (Omg get out of here Snowy) (WHO told me to get out? WHO WAS IT??? Happy kiwi and "Lookie at Cookie" aprons are patent pending and I so have proof) (It was me. THE OWNER OF THE PAGE YOU ARE VANDALIZING >:C Also your patent is invalid as ruled by Apostrophe Government) (Vandalism? ME?? How dare you; I have screenshot proof that I will be willing to prove, but not on this, because vandalism. Message wall, you, me, at Whatever Time a.m.) (FINE. I will be there >:C)

"THERE MUST HAVE BEEN SOME MAGIC IN THAT MEANIE SILVERFROST. FOR WHEN THEY ACCIDENTALLY ANGERED HER, ALL THEIR HUMAN-NESS WAS LOST" - A "Frosty the Snowman" remix about Appleflower's magic and evilness, by Darkie.

For the sake of clarification, Appleflower would like to state that in no way, shape, or form is she a meanie. These meanies are exaggerating >:C (don't listen to her, she's lying!! and very much so a meanie!!! -Darkie) (what no she's not a meanie >:c -moons) (THANK YOU, Moons) (moons nooooo she turned Snowy and me into snowmen!! -Darkie) (snowmen are good tho :( -moons)

"Pro-cheeser" - Rose, the unreasonable-est anti-cheeser (Because seriously, who tears the cheese off of pizza and then eats the pizza?)

Appleflower discovered Warriors in 3rd grade, when she was in her math class and saw one of the books lying on the next desk over. Curious, and with nothing to read, she went to the school library and looked for this mysterious series called “Warriors.” Eventually, she found a book titled Warriors, with a cat on the cover, and checked it out. She would later find that she started with The Blazing Star, book four in Dawn of the Clans. Oblivious, she continued on with Dawn of the Clans, and when she finished that, she moved on to Omen of the Stars, before realizing that this was not how the series went. She went back to the first book, Into the Wild, and re-read the entire series correctly. 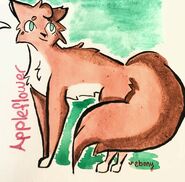 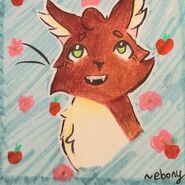 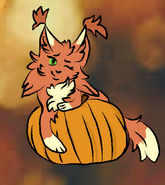 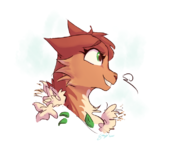 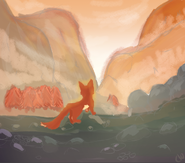 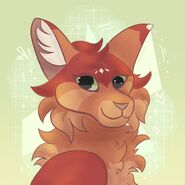 By Piney
Community content is available under CC-BY-SA unless otherwise noted.
Advertisement